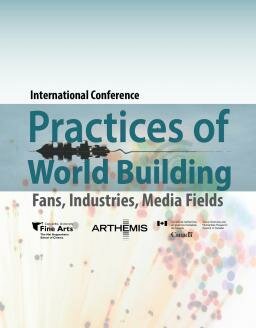 Today, viewers consume audiovisual products in the form of fragments, in any place and at any time of day. A plurality of screens, as points of interaction with media “worlds”, relocates the film-going experience (Casetti, 2010). Producers don’t just create stories or characters, they now design worlds (fictional worlds, character worlds, alternative worlds...) and they are increasingly distributing the experience of these worlds across multiple media channels, creating transmedial experiences (Jenkins, 2006), comparable to ecosystems. In this context, often described as a digital “convergence” (since the beginning of the internet era, cf. De Sola Pool, 1984, Negroponte, 1995), the viewer’s experience is not limited to mere “consumption.” Spectators become explorers and, in turn, world builders. Thus, fictional worlds are constantly expanded and remixed by fans and ordinary viewers alike who, both online and offline, rewrite, parody and pay homage to stories and characters. Social networks encourage viewers to exchange “shorts quotes” of movies with friends. These various “poaching” activities (Michel De Certeau, 1990; Henry Jenkins, 1992) contribute to rewriting the values and meanings of the original texts, expanding them and, at the same time, functioning as catalyzers for communities, suggesting new ways to “read” contemporary society, contemporary spectatorship and media production practices. This conference seeks to use the notion of world and world-building as a starting point to revisit and reconsider media theories (in film, television, visual culture, cultural studies, literature, etc.), and move beyond traditional notions of communication.

Papers will address the following issues:

• Epistemology: which tools can be used today in order to study the role of world-building in film, media and communication studies ? How do researchers adapt their methods for the production of knowledge when faced with “expanded universes”?
• History: instead of considering world building only as a contemporary practice, born with the digital technology, we can study it as a recurrent theme in literature and orality since the Classics. What links are the most fruitful to follow?
• Narratology: is an approach based on the notion of medium pertinent for the analysis of fictional worlds in the age of digital convergence?
• Game Studies: does world-building influence the division between narratology and ludology ? What is the role of games in building fictional worlds? Should remix practices be considered in the context of game culture?
• Aesthetics: are there any specific forms used by world-builders? How do the notions of remediation (Bolter and Grusin, 1999), intertextuality (imitations, transformation, adaptation), and borrowings intertwine in world-building ? What role do remix practices have in expanding a world?
• Cultural Studies: are media worlds persistent in their users’ lives? What are the uses of fictional worlds in everyday life, their role in social rituals (Goffman, 1959) and their contribution to social values and meanings? For example, how do viewers relate the building of their own identity to fictional worlds ?
• Sociology of culture:  how can we study the development of an expertise concerning media worlds?
• Anthropology: can we consider remixing as a way to build knowledge? With what results? And does the notion of myth provide a useful description for fictional worlds?
• Technology: do world-building and remix require a certain technology?
• Gender: worlds are heterogeneous conglomerations in which relations of power, including those that pertain to gender are at stake. How does gender have an influence on the modalities of relating to a fictional world?
• Nation: how does the nationality (of the product/ of the producers/of the users) influence the specificities of a fictional world?

What are the connotations of the model of world building as a metaphor for our current engagement with media? What are the consequences for our relationship to fiction?

Of Superheroes and Celluloid: Allegory, Truth, and Technology in the Dark Knight Trilogy
Vendredi, Juin 7, 2013 - 15:45

Jay David Bolter’s article “Transference and Transparency: Digital Technology and the Remediation of Cinema” identifies a “cyberphobia” that emerged in films of the 1990s, just as digital technologies were gaining widespread acceptance in the industry (and, indeed, as blockbusters increasingly began to rely on them to create theretofore unimaginable spectacle